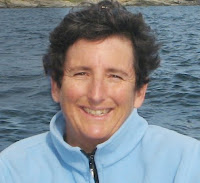 Note: Following is a guest post written by U.S. Olympic sailor and author, Carol Newman Cronin. Carol's first novel,a YA historical called Oliver's Surprise: A Boy, A Schooner, and the Great Hurricane of 1938, was published by GemmaMedia, with a sequel coming soon. When Carol mentioned that she belongs to a book promotion group, I asked if she'd tell us a little about it works. You can find out more about Carol at www.livewirepress.com. -P.M.

Last fall I got a long-awaited email from writer Roberta Gately: “I sold my book!” Her novel, Lipstick in Afghanistan, (which I’d edited, early on) will be published in October 2010.

We exchanged squeals of glee, and then she asked if she should hire her own publicist.

“Absolutely,” I replied. In this brave new world of publishing, authors are expected to help with marketing—not just retreat to their book-lined study. I specifically recommended Paula Margulies, www.paulamargulies.com, who’d done a great job scheduling signings and drumming up press for the second edition of Oliver’s Surprise.

But I couldn’t answer the rest of Roberta’s questions. And she couldn’t answer mine—questions too vague for an agent, too basic for a publicist, too business-oriented for a writer’s group. Finally, one of us dreamed out loud: Wouldn’t it be great to bounce ideas around with other authors struggling to make their books stand out?

A few days later, Roberta invited me to join her for coffee with Randy Susan Meyers, another debut author. I made the hour and a half drive to Boston and we met at a coffee shop near Randy’s house, planning to chat for an hour or so. All of us had braced for disappointment, like a three-way blind date.

There must’ve been something in the air that day (or an extra shot in our lattes). Two and a half hours later, Roberta looked at her watch and jumped up… she was late for an afternoon meeting, and we hadn’t yet solved all the problems of the publishing world! We agreed to meet again, as soon as possible.

That was the spark; within weeks Randy had fanned it into a blazing group of nine authors I’ve since nicknamed the Literary Guerillas. Three have been recently published, four will be published later in 2010, and two are agented and soon to be sold to a publisher. All of us have already “succeeded” by typical writer’s group standards; the focus of our meetings is book promotion.

We haven’t set too many rules, but the next author to “come out” has priority. In January we met five days before Randy’s very successful launch party for The Murderer’s Daughters. We critiqued the chapter she planned to read aloud, since that was her biggest concern. And we discussed which of several outfits she should wear. (I swear, our “token male” started it.) She later told us it was a great comfort to her at a very stressful time.

In March, Holly Lecraw takes center stage; her book The Swimming Pool, is due out April 6. Holly claims she’s much less prepared than Randy, but she’s already received some great reviews. I’m sure her coming out party will also be a success.

And with additional publishing debuts in May and October (and my sequel coming out in July), the LG’s will have plenty of things to talk about this year.

Best of all, when any one of us has a question, we know right where to go.

Are you involved in a writers’ group focused on publicity/promotion? If so, how is it structured?
Posted by Paula Margulies at 2:03 PM No comments: