Walking the Tightrope: Where Do Authors Draw the Line in Expressing Political Views? 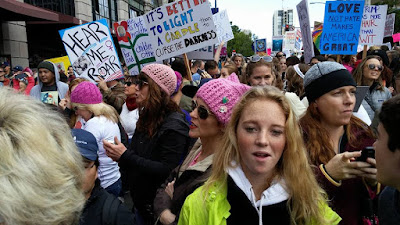 I’ve always recommended that authors refrain from discussing religion and politics in their social media and branding. It has been my strong belief that in today’s fiercely competitive book market, aligning ourselves one way or another on political or religious issues can lead to lower sales, mainly because if a percentage of the reading population disagrees with our views, they most likely won’t follow us on social media and may decline to purchase our products.

But the election of President Trump last November has changed the political landscape in drastic ways. Where before, stating political views could have consequences on sales, we now find ourselves with a growing majority who are outraged at the current administration’s policies and its handling of diplomacy. That outrage has sparked ongoing protests worldwide, where millions of people have risen up to declare their dissent and willingness to resist the current political climate in Washington.

Also new is the growing power the resistance movement has found in ignoring Trump’s brand. When major retail leaders dropped Ivanka Trump’s clothing and shoe lines from their stores this week, those who do not support Trump stepped up their support of the retailers, and sales soared.

Where before the Trump presidency it was judicious to maintain distance and equanimity with regard to politics, the climate has changed to such a degree that we’re now finding that taking actions some view as political (as was the case with the retailers who dumped Ivanka's brand) can actually be beneficial to sales. Those retailers who dropped the line claimed they did so because the line wasn't selling. It was risky to drop a contentious and outspoken president’s daughter’s brand – these retailers must have known that the president, who seems to have little control over his responses to adverse situations, would react publicly (which he did by tweeting his dismay at what he considered to be unfair treatment of his daughter). But the stance by these retailers paid off in ways that many did not expect – sales lowered initially and then skyrocketed when anti-Trump Americans decided to show the retailers support for their decision by buying at those stores.

So, given that being political can now influence sales, what does this mean for authors? And how do we in the publicity business advise our clients now that there’s a new normal for how consumers react when sellers share their views? How do those who feel strongly about the current administration express their views without driving off potential customers? And is it even a problem any more to lose those customers who don’t agree with our politics?

These questions have surfaced strongly on social media, where friends, family, colleagues, and customers converge and the new politics have created increasing divides among them. Many of us have watched as followers on social media threaten to unfollow us if we state our views, whatever they may be, too loudly or frequently. Many have drawn hard lines to followers regarding opinions – agree or be gone, they seem to say.

As authors, when we lose followers, we lose business. Those who chose to follow our blogs and support our brand do so because we offer them something – information, entertainment, connectedness, or all three. If readers no longer follow us on social media, will they still buy our books? My sense is no – as this administration continues to divide America’s with its policies, I believe that we’ll see a corresponding division in sales. Those who agree with us and our views will support us and buy our books; those that don’t will boycott our offers and/or ignore future releases.

For some authors, this trade-off is worth it. Those that feel strongly about expressing their political views may feel that protecting our country and its democracy from what they see as an attempt to upend our basic freedoms is more important than offending those potential or current readers who don’t agree that the new administration is a threat to those rights.

For me, it’s a difficult situation – wanting to support others who share my views is strong, but so is maintaining distance from political rhetoric. There a professionalism component to all of this – if I indulge myself in rants about my political leanings, how am I serving those who read my blog posts and buy my books? Do they come there to hear my politics? Yes and no. For some, finding out that we’re on the same page politically is a good thing – my sense is that they will become stronger supporters of me and my work because we think alike. For others, the insertion of politics (and this goes for religion, too) into my branding as an author and publicist could be seen as self-serving or offensive – and those who disagree with me will not follow or buy.

Given this new political paradigm where politics have become such an overwhelming factor in our lives, I would suggest that it’s up to individual authors now as to whether they decide to be political in their branding. As retailers like Nordstrom and TJ Maxx discovered, political action can have benefits. But there is also the reality that once you’ve identified your brand as leaning one way or another, you can never go back – existing and new customers can see which way you lean, and they will subsequently decide whether to support or shun you and your products based on those leanings.

In the end, we are in a strange new world where politics and consumerism are colliding more than ever. As an author, being political may serve your social activism, but it most likely will also have an effect on your book sales. Still, many authors maintain that their brand is a reflection of who they are as individuals and being true to that sense of self is crucial given what’s at stake in our country’s politics. In today’s political climate, being true to ourselves and our political beliefs may be worth more to us than growing our book sales and, for now, that just might be okay.
Posted by Paula Margulies at 12:33 PM No comments: