I’m often asked by bloggers and prospective clients to talk about some of my clients’ success stories. Here’s one I’m happy to share: Pamela Fagan Hutchins, a Houston attorney who has written a number of nonfiction books, is experiencing great success with her first novel, a romantic thriller called Saving Grace. Pamela and her husband, Eric, who was once a bookstore owner, have sold over 5,000 copies of Saving Grace since its launch in November of 2012. They delivered an additional 33,018 copies of the book in a free download on Amazon that pushed Saving Grace to three weeks on the bestseller lists and netted Pamela’s novel nearly 100 reviews.

Pamela has been featured in numerous print, radio, and television interviews and has given over 30 blog interviews. She has appeared at bookstores throughout Texas and will be touring nationwide with Saving Grace this summer.

I decided it might be better to let Pamela describe the reasons for her success in her own words. My interview with her is listed below. -PM 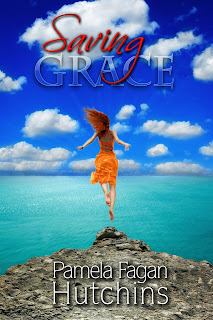 What have you done in the way of promotion to help sell Saving Grace?
A LOT! Of course we did the big giveaway with Amazon’s KDP Select, but we’ve also given away about 100 hard copies of the book to reviewers and in contests. I’ve done 14 book signings so far, with another 60 scheduled for this summer. I’ve done Q&As for book clubs, and a speech that dovetailed with the profession of my protagonist for a writers group, as well as several other speeches on general writing topics for writers groups. You mentioned the media (thank you for that, Paula!), and we even did some advertising in print media to promote some of the book signings. I also blog weekly (about 3000 views per month), and I actively engage in social media, mostly through Facebook, Twitter, and Goodreads. I entered Saving Grace in several contests, and was lucky enough to score some wins.

What would you say are the overriding reasons for your success with this novel?
I believe in my heart that Saving Grace is an enjoyable read, but my success comes mostly from the promotional efforts made by many, many other people to get some attention for this book. It’s easy to remain just a needle in a haystack with over half a million books published in 2012. I indie published, which makes my book an even smaller needle, but we -- my husband and I are partnering on this indie publishing adventure -- decided to really go for it with my debut novel, including pitching the book for chain distribution with Hastings Entertainment and Barnes and Noble, as well as booking me for roughly 80 events. In the end, it comes down to good, old-fashioned hard work.

Many pundits are dismissive of authors who sell books at bookstores. Do you agree? Why or why not?
I don’t agree! I’ve found that having a presence in book stores is important for a number of reasons. First, when I hold a book event, like a signing, I reach new readers who prefer to shop brick and mortar stores. Yes, there are still millions of diehards who refuse to give this antiquated practice up! Second, a print book placed in someone’s hand has a life beyond electrons. You’re making a tangible connection with a reader, who in turn can carry that book around with them where other people see it, lend it to others, or even give it as a gift. Third, placement in book stores stimulates ebook sales. I’ve found that most people need to see the cover of Saving Grace and/or my name several times before it tips them to the buying point. Seeing my book on the shelves in a store counts as one of those times, a highly-legitimizing time. My ebook sales always surge in the wake of book events.

How has the publicity work we’ve done together helped you? Would you recommend that other authors hire a publicist?
Paula, you’ve been such an important part of our marketing and promotion. You were absolutely key to achieving our goals for Saving Grace in its first six months. For us, this first novel is all about gaining readers for my future books. You’ve booked me in print, radio, and TV, gotten me events in great stores, and helped us net fantastic reviews with Kirkus and Midwest Book Review. You’ve placed timely and effective releases on the wires, too. Because of these things, my events exceeded our expectations, helped us gain distribution with chain stores and made this 60-city tour feasible. We’ve learned so much from you, too. I highly recommend working with a publicist for other authors. I didn’t have the time to do what Paula did for me, nor the expertise and contacts to do it as well as her, even if I had the time.

What do you consider to be the most important advice for authors who are just starting out?
Patience, Grasshopper. Write, write, and re-write. The writing is the most important thing, and the publishing side is a sloooowwww process. Even when you get published, you need patience, because then you will have to do things outside your comfort zone to promote your book, at the same time as you keep writing. It’s hard work and definitely not a get rich quick scheme, but it’s so rewarding. I wouldn’t trade it for any other work.

If you had to do it all over again, is there anything you would change?
Yes!! As an indie author with a debut novel, Amazon is a tremendously important venue for me. I did KDP Select Free Days very successfully. However, two weeks later, Amazon removed Saving Grace from KDP Select because Apple’s iBookstore had not pulled the title down as I had requested through Smashwords. However, one week later I had the chance to put it back in KDP Select once Apple finally complied with the removal order, and we chose instead to experiment with ebook distribution through every available channel. My instincts told me then we were making the wrong call, and boy did it ever turn out to be a bad choice. I lost a lot of traction, sales, and rankings as a result, and we never got it back. The book has continued to do well, but it was doing amazingly well until then.

How would you describe your lifestyle since promoting this book? Do you have lots of time, or have you had to make some sacrifices to sell your book successfully?
I spend all my spare time working on book promotion and writing. I still have a day job, a husband, five kids, and four dogs, and manage to exercise, but that’s about it. We no longer have any social life outside book events. The planned tour itself, while exciting, will take me away from my husband for most of the summer, which for us is a huge sacrifice (we really like each other ;-)). However, I will have one of the dogs and a revolving cast of my young adult children with me, and I treasure the thought of all the one-on-one time I will have with each of them on the road.

What are your future plans for Saving Grace, and do you have any other books in the works?
Saving Grace is the first novel in the Katie & Annalise series. The second novel in the series, Leaving Annalise, comes out in August 2013. The third novel is called Missing Harmony, and we will release it in February 2014. I plan to continue promoting Saving Grace¸ but in conjunction with the other two. Each will get its turn in the spotlight. And, of course, there are more books -- fiction and nonfiction -- on the horizon as well! I’ll release What Kind of Loser Indie Publishes, and How Can I Be One Too? in August 2013, as well.

If you’d like more info about Pamela or Saving Grace, visit www.pamelahutchins.com or www.amazon.com.